Children and young people deserve to be protected from abuse and neglect, and have the best possible start in life. Once a child has been reported at ‘risk of significant harm’, the child protection system works with that family to create change and a more stable home for the child. Focusing on how many of these children are subsequently re-reported at ‘risk of significant harm’, tells us if what we are doing to protect children is working to create sustainable change, and that these children are living in stable homes.

Achieving this Premier’s Priority will result in 20 per cent fewer children and young people re-reported back into the child protection system by 2023.

This is an ambitious target to reduce children and young people re-reported at risk of significant harm.

The aim of this Premier’s Priority is to continue the good work underway, ensuring improvement in the lives of vulnerable children and their families.

Data is shown by reporting year (i.e. the year after the case plan was closed) 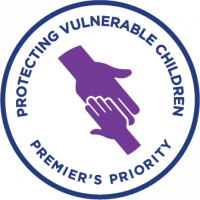