On average, approximately 1 woman is killed every 10 days by an intimate partner in Australia1.

Holding perpetrators to account, including reducing domestic violence reoffending, is central to the NSW response to domestic and family violence.

By focusing on reoffenders, we are helping to reduce domestic and family violence (DFV) in NSW and achieving positive outcomes for victims and their families. Achieving a 25% reduction in domestic violence reoffenders will mean approximately 670 fewer reoffenders by 2023.

The degree of challenge involved with reducing domestic violence reoffending is very high; a comparable reduction of 25% has yet to be reported in any other jurisdiction.

A reduction in reoffending was observed for two years following the baseline of 1814 reoffenders in 2015. However, recent data has shown an increase to 2030 offenders. The trajectory of the priority has been influenced by increased and more proactive policing of DFV, which has increased the proportion of domestic assaults that result in legal action.

The Premier’s Priority focuses on holding domestic violence offenders to account and changing their offending behaviour through a range of targeted initiatives. These include:

During 2022-2023, the NSW Government will invest $262.7 million to prevent domestic and family violence, reduce reoffending and support victim safety through the continuation of evidence-based early intervention, victim support and perpetrator interventions. This investment is part of a multi-year funding commitment that includes:

Find out more detailed information on the program of initiatives.

What can you do?

The whole community has a part to play in putting an end to domestic violence. By changing the way we think and talk about violence, gender, power, and relationships, and by educating our children in these areas, we can prevent domestic abuse from occurring. This will ensure respectful attitudes and behaviour, and build social structures that support equality and safety.

How can I get help?

Domestic violence is under-reported. You and your children have the right to be safe. If a person, including a child, is in immediate danger, call Triple Zero (000).

The Men's Referral Service provides information and counselling to help men who use family violence manage their behaviour. The service is available online or by phone on 1300 766 491. 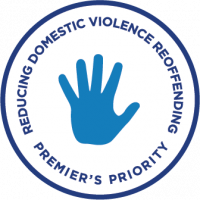 On this page
Top of page north