Here ‘regional NSW’ refers to all of the state except the metropolitan areas of Greater Sydney, Newcastle and Wollongong.

A state of many smaller economies

Regional NSW can be divided into five types of regional economy, based on their underlying geography, population and economic features. These are:

Look more closely, and you will see NSW is actually made up of many smaller local economies across these five categories.1 The NSW Government refers to these smaller economies as functional economic regions (FERs), each mapping out the regional communities that have strong economic links, mainly where people live and work.2

In total, regional NSW can be categorised into 37 FERs, as outlined in the map below. Some of these cross state boundaries into Queensland, Victoria and the Australian Capital Territory (ACT). The FERs are colour coded, to indicate the five types of regional economy.

Metro Satellites are relatively high-density communities on the outskirts of major centres of economic activity such as Sydney, Canberra, Newcastle, Wollongong and the Gold Coast. Metro Satellite FERs include towns such as Gosford, Queanbeyan, Maitland, Kiama, Lithgow and Tweed Heads. Metro Satellites are home to 53 per cent of regional NSW’s population and produce the highest economic output of the five broad categories.

Their higher populations reflect strong economic growth, which is based on traded clusters3, concentrations of industries such as mining, tourism, food manufacturing and residential care, and bolstered by their proximity to growing major cities.

** Gross value added is the value of goods and services collectively produced in these Functional Economic Regions
*** Jobs numbers from PwC's Geospatial Economic Model based on ABS 2016 Census data.

These areas are hubs of growth in regional NSW.4

Coastal areas contain a smaller proportion of the overall population of regional NSW (7 per cent) but are growing. This growth is mainly driven by those aged 65 and over. Coastal areas have remained relatively stable in terms of employment, with pockets of employment clusters (such as health services, agribusiness and tourism) growing moderately.

Inland areas radiate further from the metropolitan areas, lying beyond the Coastal and Metro Satellite areas between and around Growth Centres, and are more rural in character. They have relatively small, stable populations.

Remote areas continue to support a significant proportion of agricultural and mining activity in NSW, but are experiencing population decline.

The ‘engine’ industries driving our regions

Around the world, economies are narrowing and deepening, including in regional NSW. This means that a smaller number of key sectors are employing a larger share of the workforce.5

Key regional industries that are surviving or thriving are linked to economic endowments, or an area’s inherent or created strengths. For example, areas rich in minerals can sustain strong performance in mining, whereas an area not located between producers and their markets or distributors will likely yield low or unsustainable growth in transport logistics. These sectors and others that service markets beyond their local region are considered ‘traded clusters’.

Regions may also have economic endowments in service sectors such as health or residential care. For example, health services are available throughout NSW. However, a region with a health endowment may have a health-service specialisation that will draw people to relocate there – either as employees or patients.

Engine industries are those that employ a higher proportion of people in that region compared to other regions. They usually reflect the area’s competitive advantages. In any region, most of the workforce is employed in population-serving industries. However, engine industries are often a key reason why a town or region exists.

NSW is a significant producer of agricultural commodities, using 75 per cent of NSW land and employing more than 60,000 people (6.7 per cent of all jobs in regional NSW). Key products include beef, poultry, wheat, rice, milk, cotton, wool and forestry products, as well as value-added food and beverages.

For more than a century, regional NSW has been a significant source of resources. Our reserves of coal, gold, copper, zinc, lead, silver, nickel and cobalt are in high demand, while lithium and rare earth deposits may serve future industries. Regions with large-scale mining have had the highest jobs growth since 20056, with more than 23,000 jobs in mining in NSW today.

Regional NSW’s hospitality and diverse natural beauty – including outback, country, alpine, coastal, island and subtropical landscapes – draw more visitors from Australia and overseas every year. Each year from 2012 to 2017, overnight visitor numbers to regional NSW grew by 5 per cent. Altogether, overnight visitors to regional NSW spent more than $12.4 billion in the year to December 2017.7 More than 81,000 regional jobs – 9 per cent – support tourism.

The $1.9 billion education sector in regional NSW serves a growing domestic and international market for high-quality education. Leading research centres in agricultural technology have emerged in Orange, Armidale and Wagga Wagga, while renewable energy research centres have developed in the South East and Tablelands region. More than 82,000 regional jobs – 9 per cent – are in tertiary education and skills.

Increasing life expectancy and population growth are driving demand for health and aged care facilities in regional NSW, particularly along the mid and north coast. There are almost 139,000 jobs – or 14.9 per cent of regional jobs – in this sector. Regional providers have a key cost advantage. In 2016, they had the lowest expenses per day on average.8

Freight, logistics and distribution services are the backbone of regional NSW, providing more than 32,000 regional jobs in towns like Albury-Wodonga, Dubbo, Moree, Tamworth and Wagga Wagga.9 These towns – given they are near major roads and/or freight rail lines to large freight terminals – play a crucial role in connecting businesses to markets throughout Australia and across the world.

NSW is home to the most defence bases and facilities in Australia10, with several in regional areas such as Wagga Wagga, Singleton, Bungendore and Nowra, and defence industry clusters in the Shoalhaven and the Hunter. Defence industry capabilities in NSW include systems integration, cybersecurity and advanced materials. Defence and related industries employ 40,000 people across regional NSW.

People are moving to regional NSW every year, with it attracting 12,000 more residents overall in the 2015–16 financial year. Close to 90,000 people moved into regional NSW, with many of these new residents coming from Greater Sydney. This continues a long-term trend of migration out of Sydney towards growing regional centres in NSW. Large proportions of new residents are also moving from Queensland and Victoria. While some people are also moving away from the regions, net migration to regional NSW is still positive.

Although overseas migration typically contributes less to growth in regional NSW than in Sydney, some international migrants and refugees are settling in regional areas. 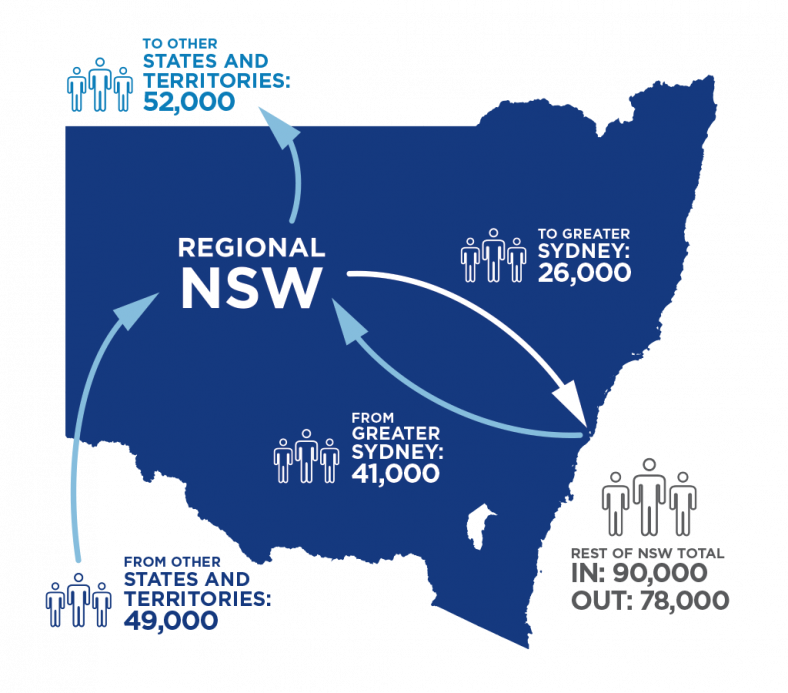 Regional internal migration estimates by region of arrival and departure, 2015–16 11

3. Groups of related industries that serve markets beyond the region in which they are located, i.e. sell to other regions and nations

4. Note: Many of these are considered regional centres or regional cities in Transport for NSW’s Future Transport Strategy 2056, and NSW Department of Planning and Environment’s 2016 regional plans

11. ABS regional internal migration estimates by region of arrival and departure (SA4 and above) 2015-16. Note, the referenced data includes Wollongong and Newcastle in regional NSW, while this vision document excludes them

Download A 20-Year Economic Vision for Regional NSW (PDF 8MB)
Download the full report as a PDF.
east
Global forces shaping our regional economies
Since 2000, the global environment in which NSW competes has radically changed. With the pace of change likely to increase in coming years, we need to consider the implications of trends.
east
Rising to the challenge
The NSW Government has a role to foster economic growth in engine industries of regional NSW. We can do this by investing in infrastructure, skills, advocacy and promotion, and the business environment.
east
An even brighter future
Our vision charts economic growth in key sectors, increased regional populations, and supporting infrastructure and services.
east
Top of page north