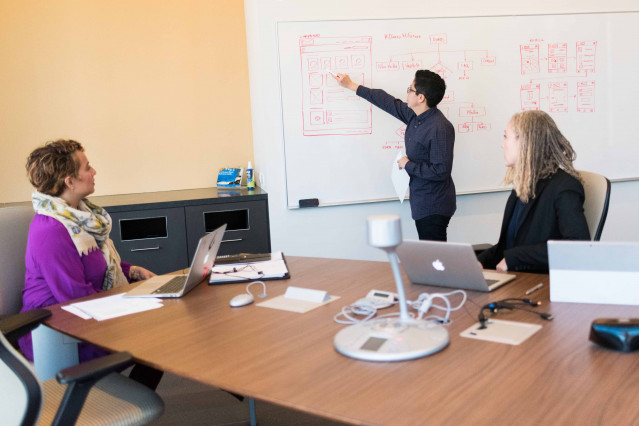 The theme for International Women’s Day 2020 is Generation Equal. This theme speaks to the collective role our organisations and we as individuals play in creating a gender equal world. Today, we’re pleased to share the results of a trial that we hope will build the evidence of how organisations can help build a more equal world.

Since 2015, there has been a Premier’s Priority target to increase the proportion of women in senior leadership roles in the NSW Government sector to 50% by 2025. Since this time, the representation of women has steadily increased from 33% to 40%.

While this increase is an important step, there is still a considerable way to go. Greater gender diversity in senior leadership can lead to better performance and innovation. This makes gender parity an imperative to delivering a stronger economy and better outcomes for the people of NSW.

A common challenge for organisations trying to reach equal representation of men and women in senior roles is that women simply do not apply for these roles at the same rate that men do.

Indeed, this was the key challenge the Behavioural Insights Unit identified in the research we conducted in the NSW Government.

The Behavioural Insights Unit partnered with the Public Service Commission and the Customer Service, Stronger Communities, Transport Clusters to increase the proportion of women applying for senior leader roles.

First, we took an innovative, data-driven approach to understanding the barriers and enablers to women in the NSW Government sector. Some of the key insights from this research were:

Using these insights, we developed two behaviourally-informed interventions designed to encourage women to reapply for senior roles after they narrowly missed out. The interventions were an email and a phone call with a recruitment manager that focused on how well the applicant had done and encouraged them to apply again.

Both interventions leverage the BI principle of the peak-end rule. The peak-end rule describes a tendency where we tend to judge an experience based on how we felt during its emotional peak and at its end.

During the recruitment process, the emotional peak is often an interview, while the end for most candidates tends to be a generic email advising that their application was not successful.

The BI interventions tried to disrupt this final impression by providing candidates who were interviewed but not successful with an encouraging email or phone call with a recruitment manager.

We thought improving this final experience could have disproportionately large impacts on the overall candidate experience, but especially so for women who we knew from our research were more likely to doubt their skills and less likely than men to re-apply after narrowly missing.

We tested these interventions using a randomised-controlled trial design with 1614 candidates randomly allocated to receive business as usual recruitment processes, a BI email only or BI email and phone call.

Two weeks after receiving the BI intervention (or not), candidates were sent a survey to record their overall satisfaction with the recruitment process, intentions to reapply and likelihood to refer a colleague to the NSW Government.  We then measured whether candidates reapplied for another senior role in the NSW Government within three and six months after receiving the interventions. 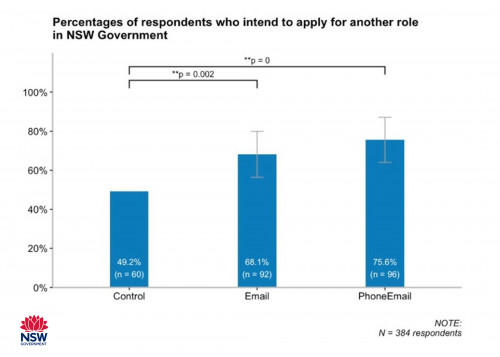 Candidates’ satisfaction and optimism with the recruitment process, as well as their likelihood to refer a colleague to the NSW Government all significantly increased with the email and phone call interventions.

But did the interventions lead to actual behaviour change?

The simple answer is yes, the interventions did lead to a change in candidates reapplying!

When we look at the candidates overall, the interventions did not lead to greater reapplication rates than the business as usual (all p values > 0.20). However, this was because the interventions had a different impact depending on whether the candidate was male or female. After 6 months, we could see that receiving the phone call and email led to a 27% increase in women reapplying compared to the usual recruitment process (p=0.097).

The interventions significantly reduced the gender gap in likelihood to reapply within 6 months.

Without the interventions, there was a significant gender difference in reapplication rates with men 45% more likely to reapply than women (59.5% vs. 41%; p < 0.001).

The BI-interventions reduce this gender gap to 12.1% (email only) and 4% (phone and email). Although men were still more likely to reapply, the difference between men and women was no longer statistically significant (email p = 0.34; phone and email p= 0.85). 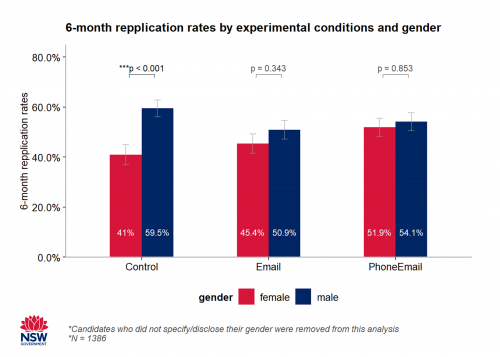 When scaled across the entire NSW Government we estimate this could increase the proportion of women in senior roles by up to .5% each year and make a significant contribution to achieving equal gender representation in senior roles.

These simple, low cost interventions are now being scaled across the NSW Government, making better candidate care part of business as usual.

The Public Service Commission is developing a toolkit to help recruitment managers implement the interventions in their organisations.