The State Funeral was an important opportunity to pay respect to the Honourable John Fahey AC, former NSW Premier (1992 to 1995), who dedicated almost two decades of his life in service to NSW and Australia.

Due to COVID-19, attendees at the State Funeral were limited to family and invited guests.

The broader community is invited to watch the video stream of the State Funeral. 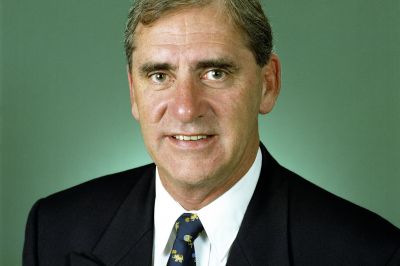 The Honourable John Fahey AC dedicated almost two decades of his life in service to NSW and Australia.

He migrated to Picton from New Zealand as a boy and was raised with strong Catholic values, which remained with him his whole life.

He was elected as State Member for Camden in 1984, with Mr Fahey dedicating 17 years of his life to politics before retiring in 2001.

During his time in politics he helped deliver major reforms for NSW not only as Premier from 1992 to 1995 but as a senior member of the Greiner Government.

In 1996 he made the move to federal politics, elected to the House of Representatives for Macarthur, where he served as Finance Minister in the Howard Government.

He was instrumental in securing the bid for the hugely successful 2000 Sydney Olympic Games and Paralympic Games.

Many remember the celebrations that swept the nation after Sydney was announced as the winner in September 1993 – and the image of Mr Fahey jumping for joy at the news.

His love of sport continued with Mr Fahey going on to serve as WADA’s (World Anti-Doping Agency) second President from 2008-2013. During his term, he built several key partnerships that have stood the test of time, particularly with the pharmaceutical industry and with law enforcement agencies around the world, including INTERPOL. According to WADA, these partnerships have given the organisation an edge when it comes to the identification of new substances that may have a performance-enhancing effect, and with the sharing of intelligence for targeted testing programs and investigations.

As WADA President, Mr Fahey brought with him a wealth of knowledge and experience in the complex worlds of politics and sport – and was known as a bridge-builder, combined with his natural attributes of fairness, diplomacy and integrity.

With his strong religious faith, Mr Fahey was Chancellor of the Australian Catholic University from 2014 until his death. Last year he was awarded Knight Grand Cross of the Order of St Gregory the Great in recognition of his distinguished service to the Catholic Church in Australia.

A lifelong sports lover, Mr Fahey also chaired the Australian Rugby League Development Board and was patron of the successful club, the Canterbury-Bankstown Bulldogs, having also been a rugby league player and coach.

History will also remember him as a brave man, for his quick-thinking and selfless action to protect His Royal Highness the Prince of Wales from an attack on Australia Day in 1994.

Mr Fahey is survived by cherished wife Colleen, children Matthew, Melanie and Criston Cicala and twins Will and Bec. Father of Tiffany (deceased). A greatly loved grandfather to Amber and Campbell.

Watch the State Funeral for the Honourable John Fahey AC, which was held at St Mary's Cathedral Sydney on Friday 25 September 2020. The service is 2 hours.

The family has requested that, in lieu of floral tributes, donations be made to the Leukaemia Foundation.