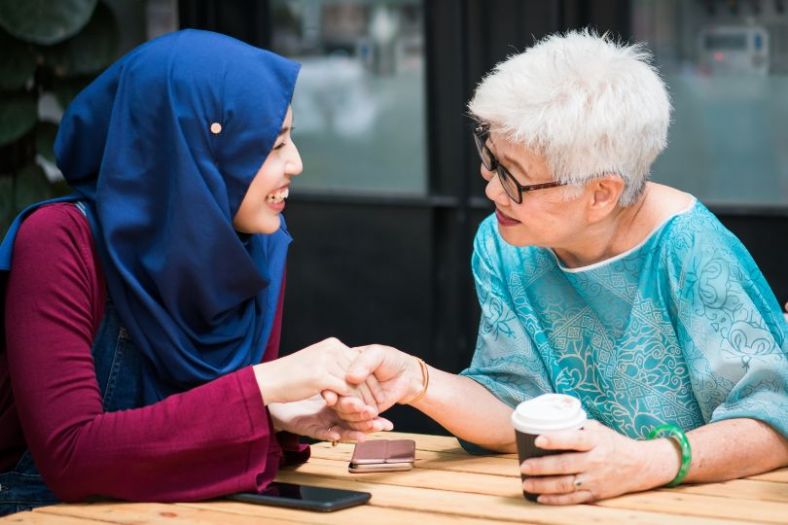 Equity and respect in the workplace provide the foundation for women to not only participate in the workforce, but also to succeed in their chosen career path. This means that all employees should be treated respectfully and have equal opportunities for career development and progression to leadership roles.

The gender pay gap refers to the difference between women’s and men’s average weekly full-time earnings.

This was smaller than the gender gap for Australia overall (14 per cent), but larger than Tasmania (9 per cent), Australian Capital Territory (8 per cent) and South Australia (7 per cent)51.

39% of the pay gap is due to gender discrimination

Gender discrimination is the primary driver of pay inequality

As shown in Figure 13, gender discrimination accounted for 39 per cent of the gender pay gap in Australia in 2017.

Gender discrimination refers to cultural biases where women’s work is perceived to be of lesser value than men’s.

This can take a variety of forms, including gender discrimination in workplace culture, recruitment practices, promotions and training opportunities52.

Less time in the workforce also leads to lower pay

Time spent not working is also a significant driver, accounting for 25 per cent of the gender pay gap in Australia in 2017.

People may experience career interruptions for many reasons, including unemployment, study or career breaks. It is particularly common for women with young children or who are carers to take time out of the workforce.

Time out of the workforce can contribute to the gender pay gap in several ways. Women who have spent less time in the workforce may have fewer opportunities to gain experience and participate in training and other skill development opportunities53.

Consequently, some women who have career disruptions may end up re-entering the workforce in lower paid roles.

As shown in Figure 14, the gender pay gap is smallest for workers in the earlier stages of their career and then grows steadily before peaking at 18 per cent for workers aged 45–54. 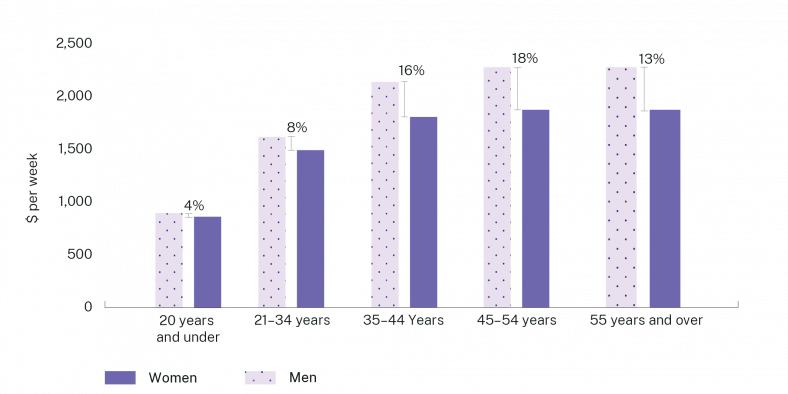 Gender segregation refers to particular industries or occupations being dominated by a particular gender. The NSW labour market is heavily gender-segregated, with one-third of employed women working in the education and health related industries55.  By contrast, women make up a very small percentage of workers in the mining and construction industries56.

Figure 15: Female and male proportion of workforce by industry 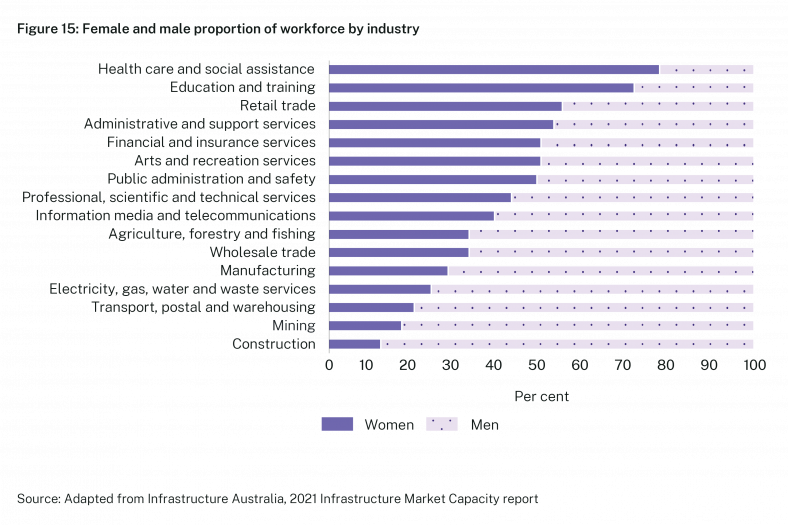 There are many reasons why women may be reluctant to work in male-dominated industries despite higher average pay and security60.

Long and rigid working hours are commonplace in some male-dominated industries like construction, which may deter women from entry61. Cultures of very long hours, presenteeism and hyperavailability also stigmatise taking career breaks, which can clash with employees’ care commitments, especially parents of young children62.

Women working in such industries are also at greater risk of experiencing sexual or gender harassment than those working in gender-balanced or female-dominated industries63.

Across a lifetime, differences in labour market outcomes including the combination of the gender pay gap, participation in the workforce and number of hours worked create a substantial financial disadvantage for women.

Indeed, 23 per cent of women retire with no superannuation at all65.

The Commonwealth Government’s 2021 Intergenerational Report forecasts the gender superannuation gap will persist for at least the next 40 years unless action is taken66.

Despite significant progress over the past decades, men still comprise a large majority of the leadership positions across the private and public sectors.

Only 17 per cent of chief executive officer roles were held by women in 2018, and women represented just 29 per cent of board members for ASX 500 companies in November 202167 68.

Women continue to face barriers to career development, with only 86 women promoted to the manager level for every 100 men70.

As men significantly outnumber women at this first step, the pipeline of women for senior leadership roles narrows. Business and community groups (such as the Business Council of Australia), have also expressed concern that the increase in hybrid and remote working arrangements during the COVID-19 pandemic may mean women choosing to work from home could miss out on career opportunities leading to advancement71.

Despite evidence that both men and women want challenging projects and interesting jobs, other studies show that women tend to receive less demanding projects compared to men74 75.

This can be due to managers attempting to prevent women from becoming overworked or due to a perception that men have greater motivation to work on such projects76.

For women who work flexibly, including part-time hours, the path to promotion and career advancement may be slower.

Most research indicates that part-time workers have slower career progression and promotion than full-time workers.

There are several reasons for this, including different treatment by employers in relation to training (compared to full-time workers), being unnecessarily prevented from undertaking certain types of work due to working part-time, and fewer hours in employment, which impacts work experience77 78.

Gender stereotypes and unconscious or implicit bias may also contribute to women’s lower level of representation in leadership roles. Traits which are stereotypically associated with women (such as gentleness and collaboration) are undervalued in leaders, compared to stereotypical male traits (such as directness)79.