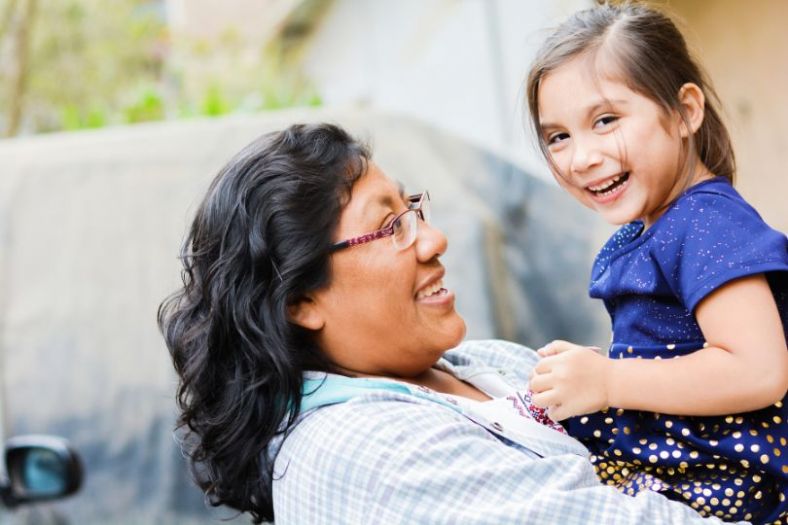 Preventing harassment and violence against women is paramount for women to be able to find and stay in work.

Safety issues confronted by women over their lifetimes are wide-ranging and include the ongoing scourge of domestic, family and sexual violence, including sexual harassment in the workplace.

Street harassment also continues to affect many women who commute to work.

Domestic and family violence can have a significant impact on women’s economic participation.

Research shows that domestic and family violence is likely to have a detrimental impact on women’s health, increase absenteeism, and decrease staff performance and productivity121.

Women who experience domestic and family violence are also more likely to have lower incomes, fragmented work history, and to be employed in part-time or casual work122.

While the Commonwealth and NSW Governments have made significant investments in domestic, family and sexual violence prevention and support programs, one in every six women in Australia continues to experience physical or sexual violence by a current or former partner124.

Several Australian surveys have shown that demand for domestic and family violence services surged during the COVID-19 pandemic125.

For example, in one study, 62 per cent of service providers reported an increase in the number of clients seeking assistance126.

Many large employers (including the NSW Government) provide additional support for victim-survivors of domestic and family violence by providing paid leave to take time away from work to start to rebuild their lives.

In addition, around 250,000 NSW employees have access to paid domestic and family violence leave through workplace agreements127.

Although a final decision is yet to be made, in May 2022 the Fair Work Commission issued a provisional decision to include 10 days paid domestic and family violence leave in awards for permanent employees128.

It is estimated that sexual harassment costs the Australian economy $3.5 billion per year.

Women’s economic participation can also be impacted by sexual harassment and safety at work.

While all employees have a right to safety at work, surveys conducted by the Australian Human Rights Commission show that almost 40 per cent of women have experienced sexual harassment in the workplace in the past five years (compared to 26 per cent of men)129.

Figure 21 shows that women employed in roles in male-dominated environments like mining, construction and transport are at greater risk of experiencing sexual and gender harassment compared to the national average130.

Figure 21: Sexual harassment rates of men and women in different industries and the national rate 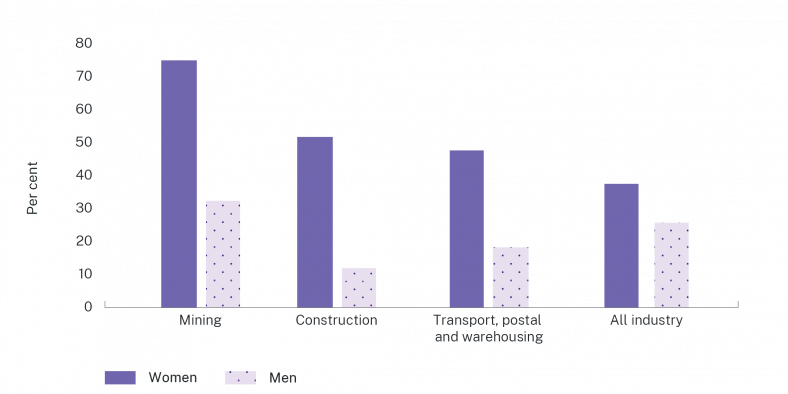 There is also a significantly higher incidence of workplace sexual harassment for culturally and linguistically diverse women, women with disability, and those who identify as LGBTQIA+131.

Consultation with focus groups for the Women’s Economic Opportunities Review revealed that ‘women report a low-level anxiety about personal safety that is always present, lurking just below the surface’132.

Sexual harassment has a negative economic impact on both the victim and their co-workers, reducing productivity, employee morale and staff retention rates133.

It is estimated that sexual harassment costs the Australian economy $3.5 billion per year134.

The Report noted the duty on employers subject to the Work Health and Safety Act 2011 (NSW) to ensure, so far as is reasonably practicable, that the health and safety of their workers, a duty which extends to providing a workplace that is safe from sexual harassment.

Making sure women feel safe commuting to and from work is critical to allowing women to pursue job opportunities where they want to, free from street harassment.

Street harassment can take many forms, including unwelcome comments and gestures, whistling, and (in the worst cases) physical or sexual assault.

Other opportunities to improve women’s safety include lighting and CCTV upgrades in key commuter locations, as well as initiatives to boost foot traffic.

The number of women over the age of 55 who are homeless in Australia has grown by 31 per cent, and older women are now among the fastest-growing cohort of homeless people in the nation.

Access to adequate housing is one of the most important determinants of an individual’s economic security.

However, for some women, in particular older single women, secure and affordable housing is out of reach.

This not only compromises their health and safety, but also undermines their ability to earn an income, care for their loved ones or pursue their own interests and aspirations.

The number of women over the age of 55 who are homeless in Australia has grown by 31 per cent, and older women are now among the fastest-growing cohort of homeless people in the nation138.

Many older women fall into housing-related financial distress because they are too wealthy to qualify for social housing but lack the financial resources to buy a house.

This is particularly true of women who separate from their partner and lose the family home, with only 34 per cent of these women managing to purchase another home within five years, and only 44 per cent able to do so within 10 years139.