On 6 February 2022, Her Majesty Queen Elizabeth II became the first Monarch of Australia to celebrate a Platinum Jubilee, marking 70 years of service to the people of the United Kingdom, the Realms, and the Commonwealth.

The Platinum Jubilee presents a special opportunity to recognise Her Majesty The Queen’s dedicated and distinguished service over the past 70 years and her many remarkable achievements as monarch.

In 2022, there will be year-long Platinum Jubilee celebrations throughout the United Kingdom, the Commonwealth and around the world as communities come together to honour Her Majesty The Queen’s historic reign.

New South Wales will join the rest of Australia and the Commonwealth countries to mark this significant anniversary.

Send a message to The Queen – Now Open

Australians are now able to send a message of congratulations or thanks to The Queen, here.

Some Platinum Jubilee key dates in 2022 include:

How you can mark the occasion in NSW

There are many ways NSW communities and individuals can get involved, either by hosting or taking part in events and activities recognising the Platinum Jubilee. Events can vary from formal and informal community activities. For example, a themed lunch, BBQ, a high-tea, concert, planting a tree or dedicating a garden in honour of Her Majesty The Queen.

Organisers can register their Platinum Jubilee events and initiatives at the Australian Government Events Hub, promoting what’s happening across the country. In addition, the Hub offers some handy hints to assist event organisers. Events registered and approved through the Hub will also be provided with the Australian Platinum Jubilee Emblem. Visit the Events Hub to see some events happening in NSW.

If you are organising a Jubilee event or initiative, we’d love to hear about it. Please contact us here at digital@dpc.nsw.gov.au 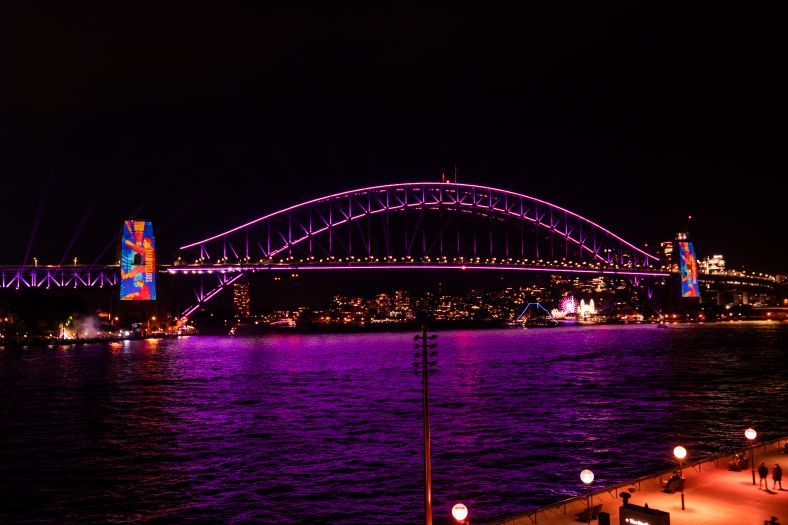 During the Vivid Sydney Festival on Thursday, 2 June there was a special one-off lighting moment at 9pm titled ‘7 minutes for 7 decades’ to honour Her Majesty The Queen’s Platinum Jubilee. It included the synchronised lighting of the Sydney Harbour Bridge, Luna Park, Tumbalong Park, International Convention Centre, buildings around Georgie Street, Circular Quay and Sydney Harbour Ferries in Royal Purple.

Sydney Harbour Ferries also sounded their horns to kick off the ‘7 minutes for 7 decades’ lighting moment in honour of The Queen’s Platinum Jubilee.

The Royal Purple Vivid one-off lighting moment created a powerful and significant moment in recognising the Platinum Jubilee on the first day of the official central celebration period (i.e. 2-5 June).

Between 2-5 June 2022, illuminations will take place across Australia. Iconic buildings and monuments will be lit in royal purple.

Here are some locations around NSW and Sydney

Organisations and communities across the state are encouraged to take part by illuminating their local buildings or structures in royal purple for a collective period of reflection and respect.

Australia will join other Commonwealth countries to mark this significant occasion.

Australian Government national events and activities to celebrate The Queen’s Platinum Jubilee in 2022 include the:

For more information about the planned national events and commemorative initiatives, visit www.platinumjubilee.gov.au

The official Royal Visit programs from The Queen’s 16 Australian tours are now available to view online at Royal Visits to Australia | The Queen’s Platinum Jubilee 2022.

The Royal Family and United Kingdom Government websites showcase the major events and initiatives taking place for the Jubilee. The websites also offer an array of resources and ideas for getting involved.

Celebrate the Queen’s Platinum Jubilee with a High Tea & Talk at NSW Parliament House. From coronation chicken finger sandwiches & mini beef wellingtons to traditional scones & Jubilee themed cupcakes, the event also includes a talk about the Parliament's special display dedicated to Her Majesty The Queen’s visits to the Parliament of NSW including her first as monarch on 4 February 1954. Collections and Heritage Coordinator Wes Stowe will share highlights from the collection of historical photographs, newspaper coverage and commemorative memorabilia. Bring along your own souvenir or share a memory of the Queen or from a royal visit.
Bookings are required.

A collection of historical photographs, newspaper coverage and commemorative memorabilia from Her Majesty Queen Elizabeth II's visit to the Parliament of NSW on 4 February 1954. The exhibition is open until June 2022.

To honour the 70th anniversary of Her Majesty The Queen’s accession to the throne, the NSW Government on 6th February 2022 illuminated the sails of the Sydney Opera House, and the façade of New South Wales Parliament in royal purple, joining other states and territories in marking the Platinum Jubilee.

Her Excellency the Governor of NSW hosted a reception at Government House in honour of The Queen’s Platinum Jubilee and planted a Red Oak Tree, a symbol of wisdom, strength and endurance, as part of the Jubilee Green Canopy program. A gift was sent to Her Majesty on behalf of the people of NSW.

A selection of photographs from The Queen's visits to NSW.

Queen Elizabeth and the Duke of Edinburgh were welcomed by large crowds in Sydney, 1963

The Queen and the Duke of Edinburgh disembarking the royal yatcht, 1963 (National Archives of Australia).

The Queen visits the Geehi Tunnel under construction at the Snowy Mountains Hydro-Electric Scheme, 1963 (National Library of Australia).

The Queen visiting a construction site at the Snowy Mountains Hydro-Electric Scheme, 1959 (National Library of Australia).

The Queen and Duke of Edinburgh visiting Sydney, 1954 (City of Sydney Archives)

Queen Elizabeth II and the Duke of Edinburgh at Dubbo Showground, 1954 (State Library of NSW).