The State Memorial was an important opportunity to honour the former leader of the NSW Nationals and Deputy Premier of NSW. Mr Armstrong was an advocate for rural communities and responsible for relocating the Department of Agriculture to Orange in 1992 — the single largest decentralisation process undertaken by a government department.

Mr Armstrong lived a life dedicated to serving and representing regional people. He held a number of volunteer positions during his lifetime, and also served as Minister for Agriculture and Rural Affairs.

In addition to his substantive contributions as a Minister and as Deputy Premier, his commitment to his electorate of Lachlan never wavered and the area still benefits from his legacy as local member. 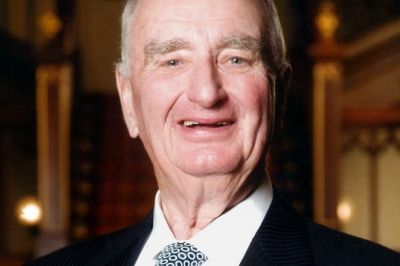 A headshot of Ian Armstrong

The Honourable Ian Armstrong AM OBE

Ian Armstrong AM OBE was remembered as a fierce advocate and champion for improving the lives of people living in regional NSW. He remained passionate about his local Cowra community up until his passing on 15 December 2020.

Mr Armstrong was a husband, father, farmer and active participant in civic life, serving with many organisations over the years including Cowra Lions Club, the Cattle Council of Australia, the Australian Stock Horse Society, the Working Kelpie Council of Australia, Cowra Gun Club, Rural Youth Organisation of NSW, and various show and several service, citizen and sporting clubs.

Mr Armstrong diligently served his community as Member for Lachlan for more than 25 years from 1981 to 2007, and his commitment to his electorate never wavered, with the area still benefitting from his legacy as its local member.

He went on to become the NSW Minister for Agriculture and Rural Affairs from 1988 to 1993. He approached his work with dedication and rigour and was responsible for the relocation of the headquarters of the NSW Department for Primary Industries from Sydney to Orange in 1992. A new head office, named in his honour, was opened in Orange in 2020.

His drive and commitment never faltered, and he went on to lead NSW as Deputy Premier from 1993 to 1995 under Premier John Fahey.

His hard work did not go unrecognised. Mr Armstrong was duly thanked for his tireless endeavours and received multiple prestigious accolades, including being admitted to the Order of the British Empire in 1978 for services to Primary Industry, receiving the Centenary Medal in 2001, and was admitted as a Member of the Order of Australia in 2009.

After leaving Parliament, Mr Armstrong didn’t slow down, rather, he poured his energy elsewhere, including campaigning for better transport links between Sydney and the Central West as the Chairman of the Bells Line Expressway Group.

He is survived by his wife Jenny, children Angus and Angela and grandchildren Oliver, Louisa, Bronte and Jock.

Watch the State Memorial for the Honourable Ian Morton Armstrong AM OBE, which was held on Monday 22 February 2021.

The family has requested that, in lieu of flowers, donations can be made to Dementia Australia.