The NSW Telco Authority Board conducted a site visit last Friday to one of the new telecommunications towers that have boosted shared Government Radio Network (GRN) coverage in the North-West region of NSW.

The site, north of Dubbo, is part of the Pilot Project for the Critical Communications Enhancement Program (CCEP) that is consolidating and enhancing GRN coverage across NSW.

Beth Jackson, Chairperson of the Board, said it was great for the Board to see the work of the Program first hand.

“These impressive towers are the lifeline of first responders in emergency service organisations. The increased coverage within the North-West region supports first responders to more easily share information and coordinate responses to critical incidents with better outcomes for the public and the frontline,” said Ms Jackson.

“The Pilot has increased shared radio coverage from under 60 per cent to over 90 per cent, equating to more than 20,000km² of in-vehicle coverage in the region.”

Kate Foy, Managing Director NSW Telco Authority, said the Pilot has been a tremendous success and established a blue print for the expansion of the CCEP across the state.

“We’ve gained a lot of valuable insight and learnings from the Pilot. We’ve laid a solid foundation and we’re looking at ways to integrate our learnings into the wider state rollout of the CCEP,” said Ms Foy.

Last Thursday, the Board held its first regional Board meeting at the Rural Fire Service (RFS) facility in Dubbo, where members of the Telco’s Leadership Team met with local RFS volunteers. It was also the first Board meeting since Ms Jackson was appointed Chairperson.

See network coverage before and after the pilot in the North West region: 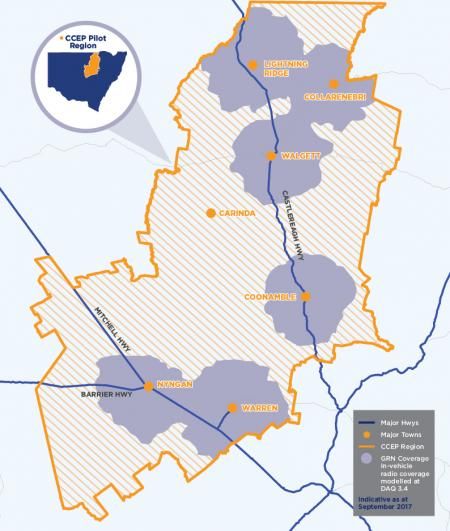