Capture the joy of a new baby or celebrate a special birthday with one of our decorative birth certificate designs.

Complete our online application form to order a birth certificate and select the decorative design of your choice. It's a wonderful gift for parents, grandparents, godparents or relatives.

Our commemorative birth certificates are:

If you're ordering a birth certificate for a child or adult, you can apply for either a:

You can't order a commemorative birth certificate on its own for a new baby.

Giggle & Hoot – Feathered friends Hoot and Hootabelle from the Giggle and Hoot show bring brightness to these appealing certificate designs.

Available in blue or pink, with a choice of skin tone, these certificates are a touching memento of a day to remember.

Fauna – this beautiful design by Australian artist Lynne Muir has been a favourite for the last 20 years.

Ken Done – 'Sydney Harbour' is an original work by world-renowned Sydney artist Ken Done. Royalties from the sale of this certificate go to supporting UNICEF.

Blinky Bill – Dorothy Wall created this iconic Australian koala character in 1933. Ever since then Blinky Bill has been appearing in books, TV and films, and now he's popping up on this delightful certificate.

May Gibbs (1877-1969) was an illustrator, artist and children's author best known for her gumnut babies creations, inspired by Australian bush flora. Royalties from sale of May Gibbs’ designs help fund the charities Cerebral Palsy Alliance and Northcott.

Boronia Babies – In 1916 the book 'Gum blossom babies' was published, the beginning of the bush fantasy world that captured the imaginations of Australians for over a century.

Snugglepot & Cuddlepie – The most well known and widely recognised of the gumnut babies are the adventurous pair Snugglepot and Cuddlepie.

These bold graphic designs created by Indigenous artists from NSW are a wonderful way to celebrate a birth.

In this collection are 'Be Blessed' by Dianne Ussher, and two designs by Pam Walker, 'Amongst the Flowers' and 'Peaceful'. 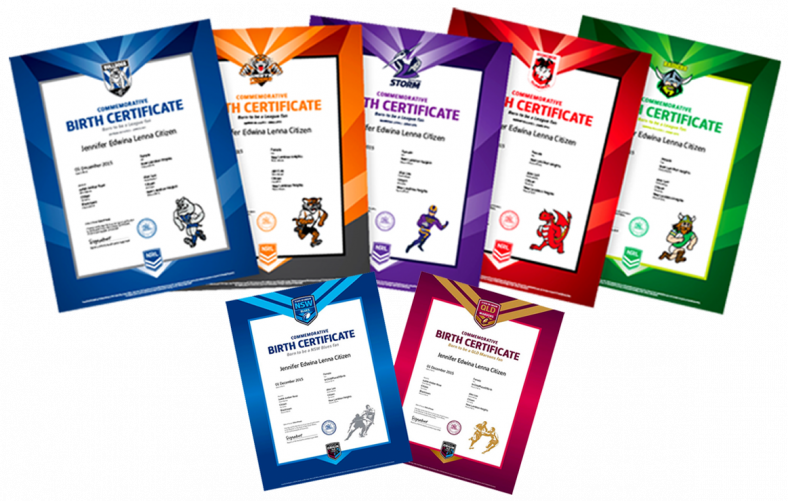 NRL – Rugby fans we've got you covered with all 16 NRL clubs represented in these designs. Official NRL approved product.