A State Memorial Service was held for the late Mr Eddie Jaku OAM at Sydney Town Hall at 10.00am on Wednesday 15 December 2021.

Eddie Jaku was a survivor of the Holocaust and one of the founding members of the Sydney Jewish Museum.

In 2013, Eddie was awarded the Order of Australia for his significant contribution to Holocaust education and for his services to the Jewish community.  In 2020, at the age of 100, Eddie wrote a memoir “The Happiest Man on Earth” which went on to become an award-winning international best seller.

Mr Jaku is survived by his wife of 75 years, Flore, sons and daughters-in-law Michael and Linda and Andre and Eva, grandchildren Danielle, Marc, Phillip and Carly and five great grandchildren.

Watch a recording of the State Memorial for Eddie Jaku OAM below, which was held at Sydney Town Hall on Wednesday, 15 December, 2021.

The State Memorial Service at Sydney Town Hall took place on the lands of the Gadigal people of the Eora Nation. We pay respect to their elders past, present and emerging. 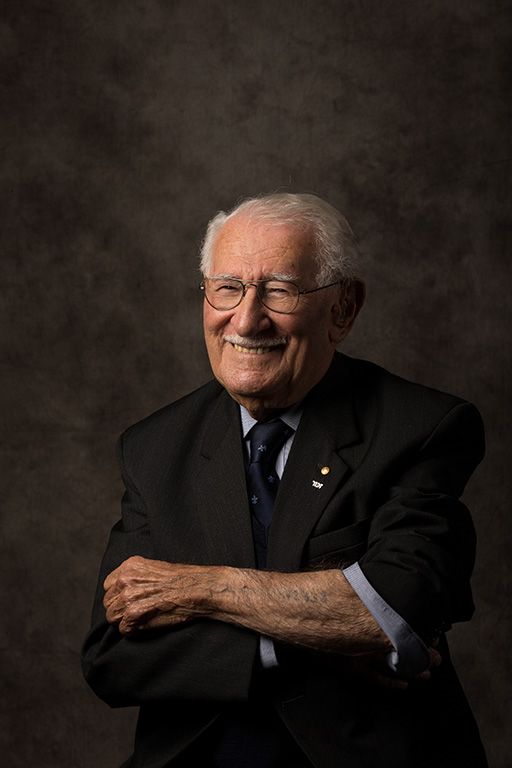 Eddie Jaku was born in Leipzig in 1920 to a loving family who regarded themselves as Germans first and foremost, and Jewish only in their home. Although he was the only Jewish student at his school, Eddie got along well with his peers.

Everything changed when Hitler came to power. Arriving home from boarding school on 9 November 1938, the infamous “Kristallnacht” Eddie was brutally attacked by Nazi thugs and incarcerated in the Buchenwald camp along with thousands of other Jewish men.

Upon release from Buchenwald, Eddie and his father escaped to Belgium.  He was imprisoned in both Belgium and France eventually re-joining his parents and sister in Belgium where they continued to live illegally.

In October 1943, the family was arrested. They endured the gruelling train ride to the notorious Auschwitz concentration camp where his mother, aged 49, and father, 50, were murdered. Eddie survived thanks to his youth and technical skills, being marked as an “economically indispensable Jew”. He also survived a death march in January 1945, escaping and hiding in a cave in the forest to be eventually rescued by an American tank crew in June.

After recuperating from his ordeals Eddie met Flore on his return to Belgium. She had survived the war in France under an assumed identity. They wed in 1946 and had their first son Michael in 1948. They migrated to Australia in 1950 as stateless refugees where their second son Andre was born in 1952.

In Australia Eddie embarked on a number of successful business ventures including a service station and real estate agency.

Eddie was a founding member of the Sydney Jewish Museum, which opened in 1992 and one of its most popular volunteer survivor guides.

In 2013 Eddie was awarded an OAM for his significant contribution to Holocaust education and for his services to the Jewish Community.

In 2020, at the age of 100, Eddie wrote a memoir “The Happiest Man on Earth” which went on to become an award-winning international best-seller.

Eddie is survived by Flore, his wife of 75 years, his sons and daughters in law Michael and Linda, Andre and Eva, grandchildren Danielle, Marc, Phillip and Carly and five great grandchildren.