The State Funeral was an important opportunity to honour Mayor Brady and her lifetime of service to Cobar and Western NSW.

Mayor Brady moved from Sydney to Cobar in the late 1960s and was first elected to the Cobar Shire Council in 1976. She was a strong advocate for her community and served as Mayor for almost 23 years – making her NSW’s longest ever serving female mayor. 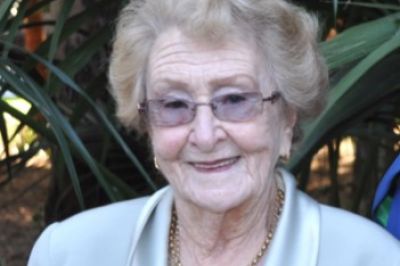 Lilliane Olive Brady OAM was a proud, passionate and caring citizen of her Cobar community in the heart of NSW from the day she arrived in the mining town more than 50 years ago.

With her fighting spirit, and no holds barred attitude, Lilliane ‘Lil’ Brady campaigned for Cobar right up until her death, seeking a new hospital, better infrastructure and mining rights, making her one of Cobar's greatest citizens.

Born in Lake Cargelligo on 29 December 1930, Lilliane and her husband Dr Allan Brady started a family in Sydney and moved to the mining town in the 1960s for a 12-month stint.

It would turn into a lifetime journey, where for the following five decades, Lilliane Brady would earn the title as Cobar’s fearless leader.

The Bradys shared their time between Cobar and a 145,000-acre sheep farm. The property also housed the family horses – another life-long passion of the famous Cobar resident.

Lilliane Brady first ran for council in the 1970s, after an elderly man was transferred to Orange more than 400 kilometres way due to a lack of aged care facilities in Cobar, and died alone.

She was first elected to the Cobar Shire Council in 1976, and became a strong advocate for her community, serving as Mayor for almost 23 years.

She was the longest-serving female mayor in the state's history, and best known for being an outspoken champion, not just for Cobar, but for Western NSW.

Her local government political career spanned almost 40 years, in which she would have associations in all levels of government.

Mayor Brady was a woman not afraid to speak her mind and rallied passionately for projects that needed funding – either by sourcing governments grants or fundraising locally.

By 1982, Cobar opened the Lilliane Brady Village, a 34-bed not-for-profit facility including a hostel and a nursing home, plus a multipurpose health centre connecting the village.

Not only did Mayor Brady oversee a mining revival in the region, she ensured Cobar became one of the state’s great outback towns.

With the car-lover’s festival in 2018, following the filming of 1982 movie Running on Empty in the town, as well as the famous Cobar races – Mayor Brady was a passionate supporter of both events that are also hugely popular on the tourist calendar.

If not at the council chambers, Mayor Brady could be found at the local racetrack. She owned several racehorses over the years, which led to a substantial collection of hats and fascinators, with the well-dressed Mayor happy to lend them out to locals for race day.

One of the biggest thrills for Mayor Brady was when her horse Magic Bella won the Cobar Cup in 2015, with the jockey wearing her colours – yellow with blue horseshoes.

In 2001 Mayor Brady was awarded a Centenary Medal for services to local government.

In 2012 she was awarded a Medal of the Order of Australia for service to local government and to the community of Cobar.

Last year she was awarded the Minister for Local Government Award for her commitment to increasing participation of women in local government.

Mayor Brady had planned to retire in September.

Mayor Brady is survived by her three children Sue, Deidrei and (Pally) and her grandchildren.

Watch the State Funeral for Mayor Lilliane Brady OAM, which was held on Friday 19 February 2021.

The family has requested that, in lieu of flowers, donations be made to the Cobar Mayoral Chest by contacting the Cobar Shire Council or calling (02) 6836 5888.